In 2019 Uptown United embarked on a plan for the commercial corridors along Wilson Avenue and Broadway near the newly rebuilt Wilson CTA station. The goal of this plan is to support and build a thriving commercial district. In October of 2019 we launched three public surveys to get your input: a separate survey for three distinctive areas of Central Uptown’s commercial corridors. Surveys were closed in November of 2019.

Seven key urban design strategies were selected to gather further input from the community. Each strategy represents tactics to achieve the desired vision and values of Central Uptown defined by the community and stakeholders. These urban design strategies include: mobility, architecture, curbside use, pedestrian safety, storefronts, placemaking, and streetscapes. Community participants were asked to select their top three priorities for each corridor based on design principles and ideas presented. A Development Guide for Central Uptown was developed to document what we heard about each corridor from participants and to define implementation steps for each principle in action. To read the Development Guide for Central Uptown click here.

State of the Area Report

To read the State of the Area Report click here. This report includes a summary of public input received during the community survey. It also includes market data for three logical market areas based on the Wilson CTA station as the center point and three key issues that were used to frame planning strategies. These topics became guiding themes in the creation and development of specific planning concepts and revitalization strategies for enhancing Central Uptown’s physical appearance and overall economic environment.

If you have any comments or would like to know more, please email justin@nullexploreuptown.org. 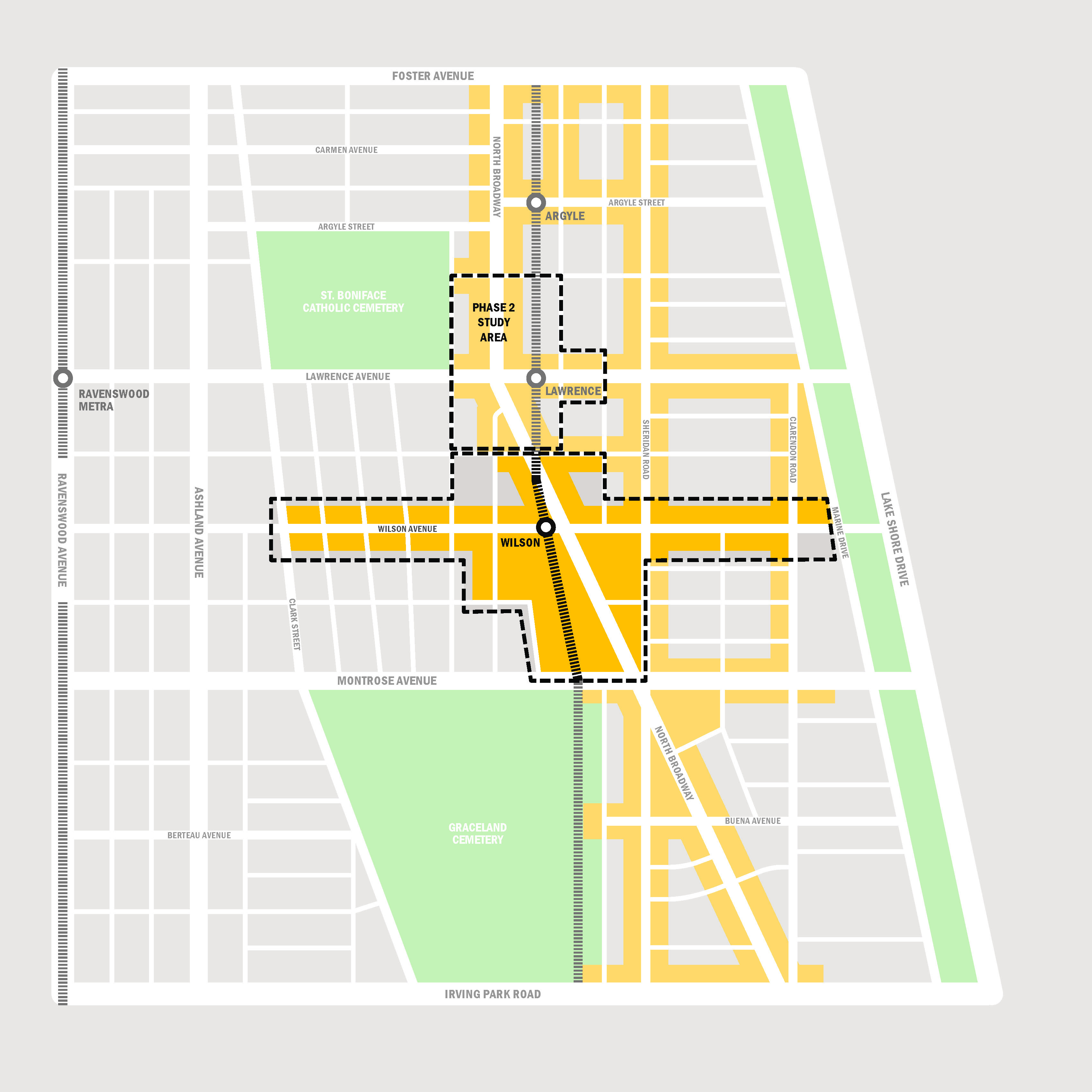 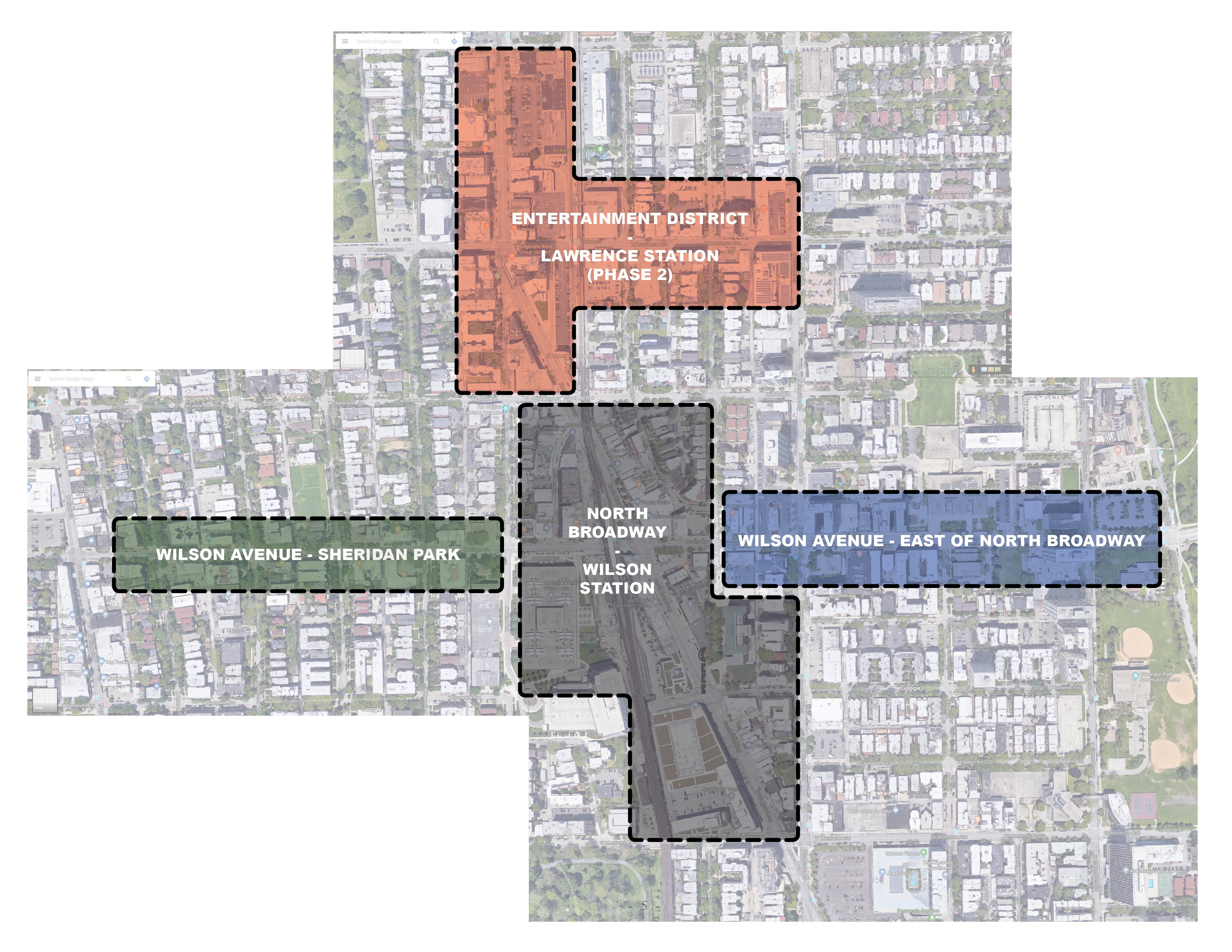 For the purposes of this study, Central Uptown has been divided into four sub-areas including:

Wilson Avenue between Clark Street and Racine Avenue consists of a mix of residential, commercial, and mixed-use properties that are typically pedestrian-oriented. This 1/2-mile stretch of Wilson Avenue is the commercial “Main Street” for Uptown’s Sheridan Park area, a National Register Historic District within Uptown. Wide sidewalks, historic architecture, and the recent addition of several new businesses has given this stretch of Wilson Avenue in Sheridan Park a charming feel. Additionally, the area sits next to Truman College, which welcomes nearly 25,000 students, staff, and faculty to its campus throughout the year. Weekday pedestrian counts near the Wilson El station are higher than in neighboring Andersonville and Edgewater, and with the recent Wilson CTA Station reconstruction project, Sheridan Park is sure to grow for years to come.

Wilson Avenue between Kenmore Avenue and Marine Drive consists of a mix of residential, commercial, and mixed-use properties that are typically pedestrian-oriented. This 1/2-mile stretch of Wilson Avenue is a commercial “Main Street” for Uptown’s Clarendon Park and Lakeside Area sub-neighborhoods. This part of Uptown greets the city’s biggest attraction—the lakefront. Montrose Harbor, Clarendon Park, and area beaches attract locals and visitors for sports, boating, biking, bird-watching, swimming, concerts, and more. There are many opportunities for local businesses to serve the lake-going crowd, as well as the new residents of several mixed-use developments and Weiss Memorial Hospital’s numerous employees. This area is a contrast of high-rise residential buildings among smaller historic apartments and homes, which directly face the lake. In warm months, thousands pack Montrose Beach and Harbor daily.

North Broadway near the Wilson Station consists of a mix of commercial and mixed-use properties. While part of this area is included in the Uptown Square Landmark District, another part of this area is often referred to as “Wilson Yard” because it is the location where an elevated CTA rail yard and train repair facility stood until being destroyed by fire in 1996. In 2010 this site was redeveloped with two 7-story buildings as well as major retail tenants anchored by Target.  In 2017 the Wilson El Station reconstruction project added purple line service as well as a new station entrance at Sunnyside Avenue. This part of North Broadway is also home to Chicago’s Pride Parade, which kicks-off at the intersection of North Broadway and Montrose Avenue.

The Entertainment District near Lawrence Station consists of a mix of residential, commercial, and mixed-use properties. This area is also part of the Uptown Square Landmark District. Once the city’s second-busiest commercial area, Uptown Square remains to this day vibrant night and day thanks to a concentration of entertainment venues such as the Aragon Ballroom, Riviera Theater, Green Mill, Preston Bradley Center, and Uptown Lounge–all of which pack in over 240,000 attendees annually. Restaurants representing many cultures and cuisines are clustered in this area as well, popular with pre- and post-show crowds and neighbors. Uptown Square has a long and colorful history as an entertainment destination–derived from the many clubs and theaters that hosted stars of the silent film and jazz eras, movie palaces in the 1950s, and then rock shows in recent years. In the next few years massive public investment in sidewalks, a new plaza, and renovated transit stations will reinforce the area’s vibrancy and continued appeal. A focused study of this area will be the second phase of the Central Uptown Planning Study.